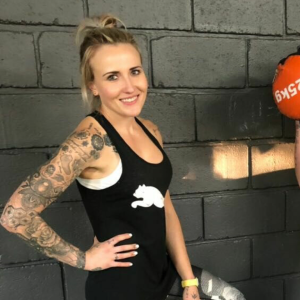 I went overboard a couple weeks back and bought about 100 tins of assorted roasted nuts. Ok not really 100 tins but too many.  They were at a discounted price which helped me justify spending far too much and buying far too many.  We all know nuts are super healthy and provide loads of benefits for your body….. when consumed in moderation 😜 not so much if you are taking a handful every time you enter the kitchen… which is about every 5 minutes 😬

I’ve been using them in salads, packed them in lunch tins for school and made biscuits last weekend. We still had a couple tins left so I thought I’d try and make my own nut butter.

I emptied out the last 4 tins we had into my blender which was a combination of cashews, almond, peanuts and walnut and started I blending.

It’s best to use nuts which have been roasted because the oils are released easier while blending but raw nuts will work too. I was lucky that these had already been roasted. If they had been raw, I would have used them just as is.

After blending for about 1 minute I thought that this might be the easiest thing I’ve ever done. Until my blender over heated 😂 I switched it off and decided to make two separate batches to try and lessen the load.

I waited a couple minutes and tried again…. I had to stop blending every 30 seconds or so to scrape down the sides as the ‘mixture’ becomes so thick.

After doing this a couple times it started looking like we were heading in the right direction. 🤗

I then added in the following:

and continued to blend for about 3 minutes longer.

I then made the second batch exactly the same as the first which took waaaay longer as my blender continued to over heat.🙄🙄

Eventually, after lots of swearing and time….. success!

Wow! Let me tell you, it tastes great! I was a little nervous with my decision to mix so many different types of nuts together but it turned out oh so YUMMMY!

There are so many different types of ingredients which you could add in to make it your own. Roasted coffee beans and almonds would make a stunning espresso almond butter which I will have to try. 😯

Next on the agenda is sunflower and pumpkin seed butter.  However, I will not even consider to attempt this with my blender. A food processor would be so ideal right about now… Father’s Day is around the corner 😅😅😅

Wishing you all a very happy Saturday!